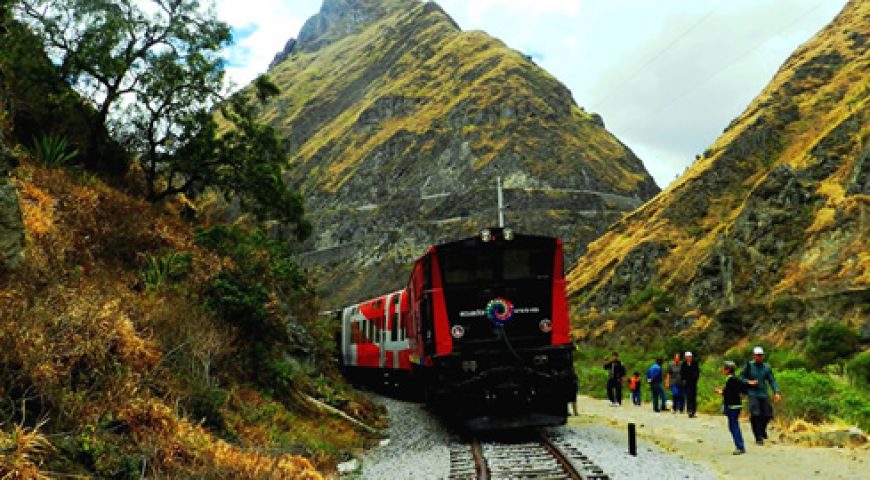 I’m in Alausí, a village in the Andean highlands of Ecuador to experience the Train ride to Devil’s nose.
I took the bus from Riobamba to Alausí, a two hour bus drive, with fantastic views the whole way, before i knew it i was in Alausí. I looked for a hotel (which are not hard to find in Alausí, within five minutes of my arrival I found a room, also important it was affordable, 15$ for one night), walked through the village and enjoyed the great scenery Alausí has to offer. Tomorrow I will take the train ride Nariz del Diablo, also known as the devil’s nose.

28-05-2016
I woke up early, because today at eight o’clock I will take the train ride Nariz del Diablo. I took a shower, looked for some breakfast and was ready to go.

While we were riding towards Nariz del Diablo, we were driving past Sibambe were we could see natives do a traditional dance, as we were driving by a cowboy (native on a horse) was riding along the carriage, waving at us. We stopped in front of Nariz del Diablo, were the cowboy was greeting us and letting you in the horse (for a small payment). From here you could really see the devil’s nose.

From Nariz del Diablo we rode back to Sibambe, were we stopped for an hour and were able to enjoy; some traditional dances from the Nizag community, a great scenery, a museum about how the railroad was made and you were able to walk around for a bit I was able to do all of it, and while I was walking around I saw beautiful birds and insects including a hummingbird and a monarch butterfly. After the hour was done, we rode back to Alausí it was the same way back, but still an amazing view to see, as some Ecuadorians thought otherwise, some slept the whole way back, but as for me it was amazing.

Being back in Alausí I bought, as a real tourist, some souvenirs, which are not hard to find because almost the whole town was full of touristy things.
I went to a restaurant (the first one I’ve seen which said vegetarian food available) ate some vegetarian food, walked up to San Pedro (a huge statue of San Pedro) and enjoyed my view. After that I went back to Riobamba by bus (also very cheap about 2,5$) again a two hour bus drive with amazing scenery.